“It was a lot easier than I thought, and completely worth it.” 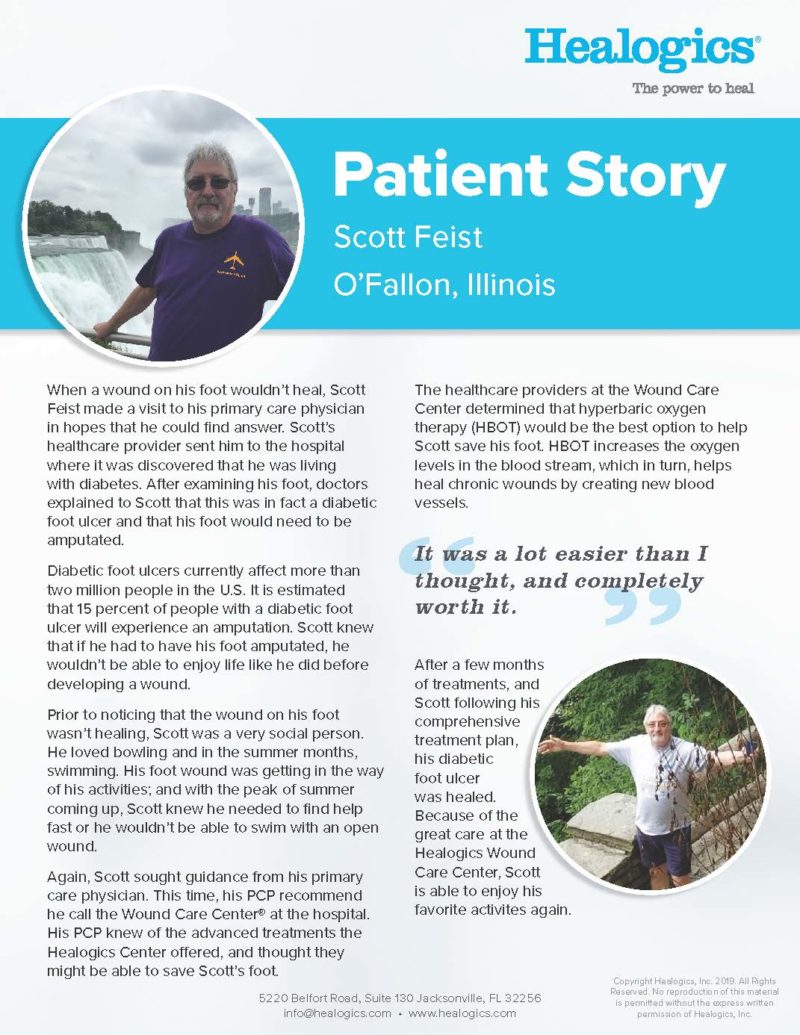 When a wound on his foot wouldn’t heal, Scott Feist made a visit to his primary care physician in hopes that he could find answer. Scott’s healthcare provider sent him to the hospital where it was discovered that he was living with diabetes. After examining his foot, doctors explained to Scott that this was in fact a diabetic foot ulcer and that his foot would need to be amputated.

Diabetic foot ulcers currently affect more than two million people in the U.S. It is estimated that 15 percent of people with a diabetic foot ulcer will experience an amputation. Scott knew that if he had to have his foot amputated, he wouldn’t be able to enjoy life like he did before developing a wound.

Prior to noticing that the wound on his foot wasn’t healing, Scott was a very social person. He loved bowling and in the summer months, swimming. His foot wound was getting in the way of his activities; and with the peak of summer coming up, Scott knew he needed to find help fast or he wouldn’t be able to swim with an open wound.

Again, Scott sought guidance from his primary care physician. This time, his PCP recommend he call the Wound Care Center® at the hospital. His PCP knew of the advanced treatments the Healogics Center offered, and thought they might be able to save Scott’s foot.

The healthcare providers at the Wound Care Center determined that hyperbaric oxygen therapy (HBOT) would be the best option to help Scott save his foot. HBOT increases the oxygen levels in the blood stream, which in turn, helps heal chronic wounds by creating new blood vessels.

After a few months of treatments, and Scott following his comprehensive treatment plan, his diabetic foot ulcer was healed. Because of the great care at the Healogics Wound Care Center, Scott is able to enjoy his favorite activities again.